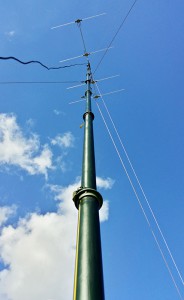 We had a fun day up at Kelvedon Hatch on Sunday for the Practical Wireless 70MHz contest with fantastic weather yet again!

Dave M0TAZ was operating with his Racal PU12 mast and IC-7100 and I brought along my amplifier and Yagi for this once a year event. There was good activity although as predicted, the final hour was a bit slow going.

We were operating for the whole four hours, running 160W into an 8.24dB Yagi giving an ERP of ~1kW and we worked a total of 47 stations, of which the best DX was GM4JR at 454km. We also worked into Wales and The Netherlands.

As PW contests do not give you a QSO map, I plotted my own in Google Maps by exporting a KML file from the Minos logging software. The QSO map can be seen here.

A photo of the field can be seen below…

I also took some video on my phone, which can be seen below…

You can also read Dave’s article on his website. George M1GEO, Chris G8OCV, Dave M0YOL and some others also attended to play some radio so it was a good day all round!