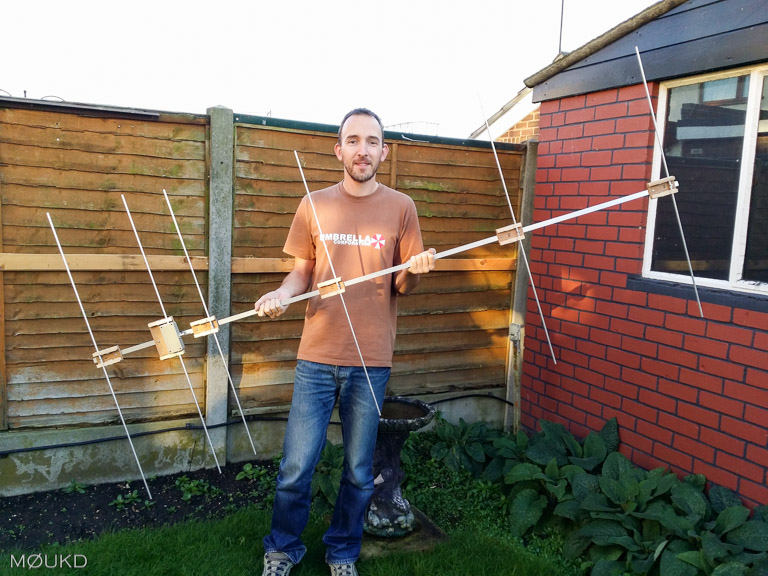 Version 4 of the portable beam, the ‘PegTenna’!

This page contains construction details on a 2 metre 144MHz VHF Yagi beam antenna, designed for portable use. Since an old 5 element version (v1) of my antenna was shown in the July 2011 edition of RadCom, a few people have contacted me asking for some information on how it was constructed. It has gone through a few revisions over the years (this is version 4) and is now a 6 element Yagi Uda (poor Uda never seems to get a mention), based on a DK7ZB design, with a little tweaking in EZNEC.

The challenge for this antenna was that it had to be compact enough to walk up a mountain and be very quick and easy to assemble and disassemble. 6 elements was chosen, as the boom length is 2m (6.5ft) which keeps it portable, whilst still having good gain. The next problem was how to build it so it can be put together quickly. After a lot of thinking, I decided to use wooden clothes pegs to mount the elements and driven element. Previous versions I have made used large screw terminal blocks, perspex, plastic booms, but this is certainly the best version so far!

Note: The version I built, as described on this page, is optimised for SSB at the low end of the 2m band (144.3MHz) and will not be suitable for using at or above 146MHz. Bill, VE7WNO built this Yagi and observed the SWR shot up above 146MHz (see SWR plot above 146MHz here), so I have designed a version of this antenna centered on 146MHz for more broadband coverage of the USA/Canadian allocation of 144-148MHz. The dimensions for the all band coverage version can be seen here and SWR plot is here. It also uses ¼” tubing (6.35mm) instead of 6mm. See Bills comments at the bottom of the page for more info. OK, on with the 144MHz build…

The dimensions are below: 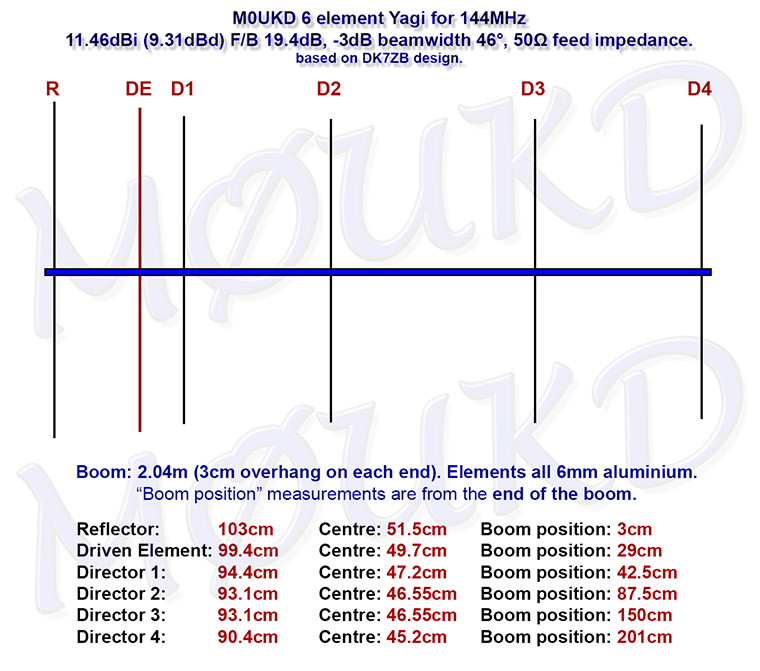 The dimensions of the 2m beam antenna, centered on 144.4MHz. Click for a larger image. 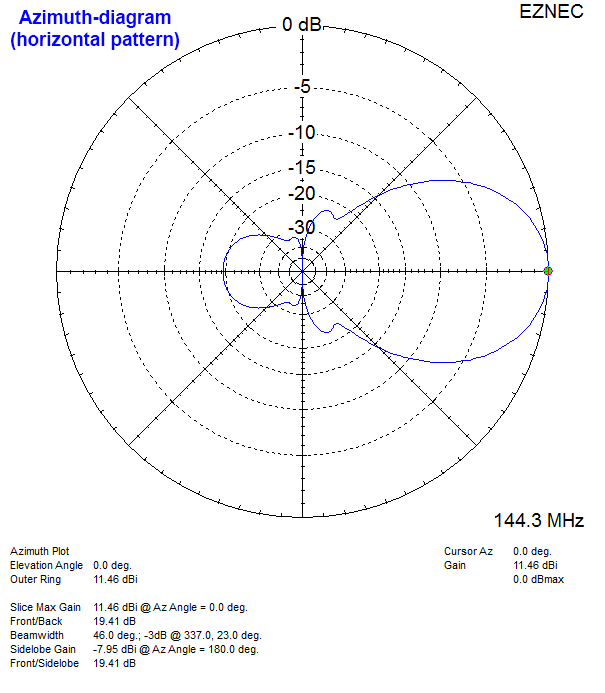 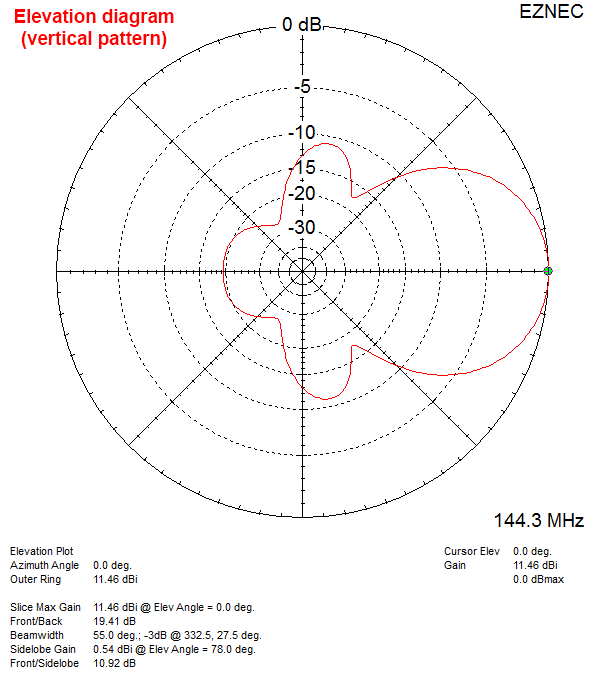 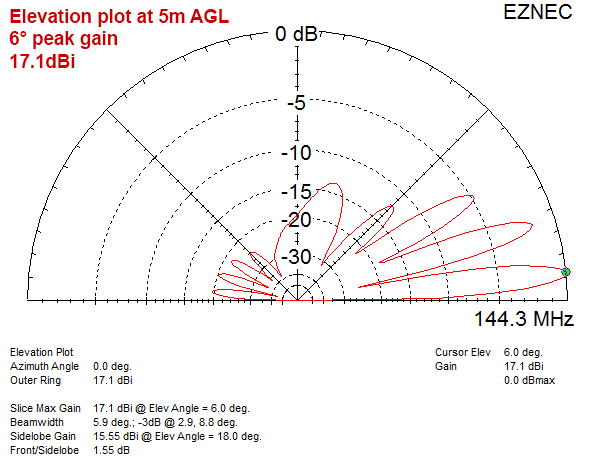 Elevation plot with the antenna at 5 metres above ground, for example in a portable set-up. Peak gain 17.1dBi at 6° 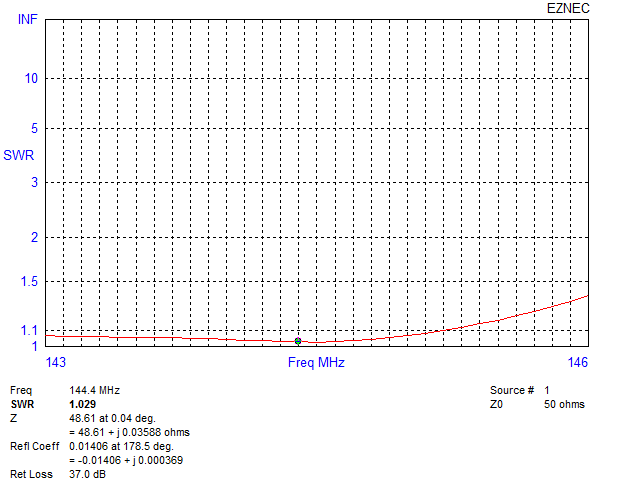 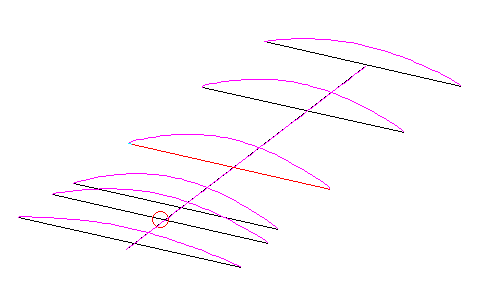 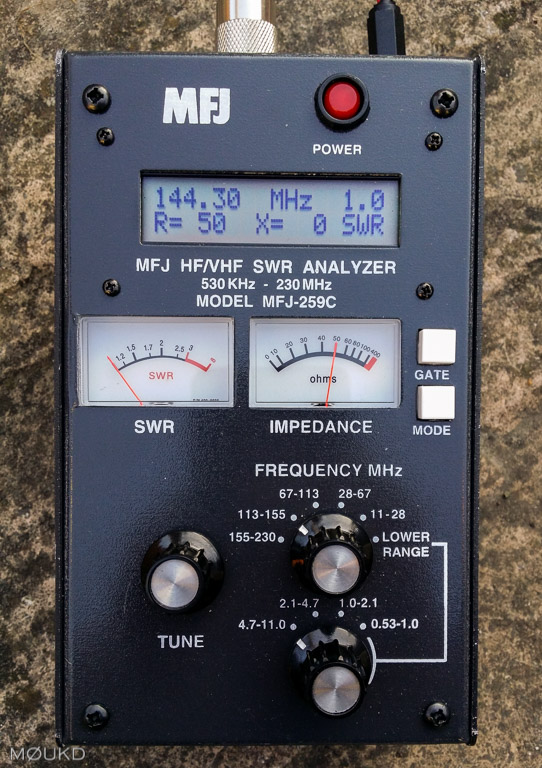 First test with antenna mounted 3m above ground. Very happy to see this on the analyser! Never seen it like this before on any other antenna.

Of course there are many ways to fabricate a Yagi antenna, but hopefully this page gives you some idea of some options. Below are some photos showing in detail how the antenna is put together. 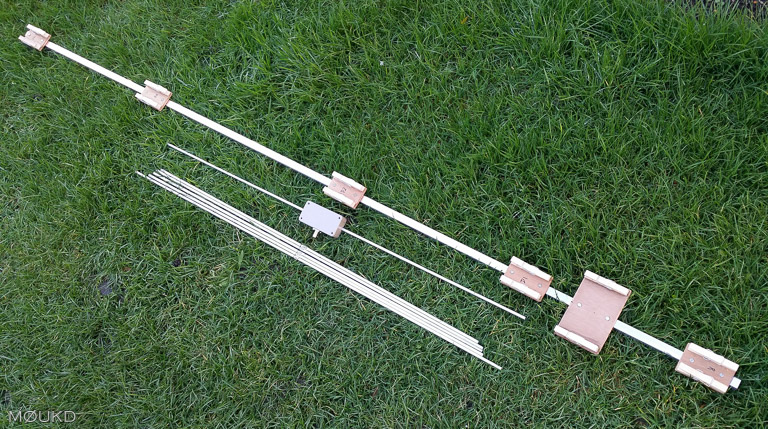 The antenna disassembled. It can be put together in 30 seconds! 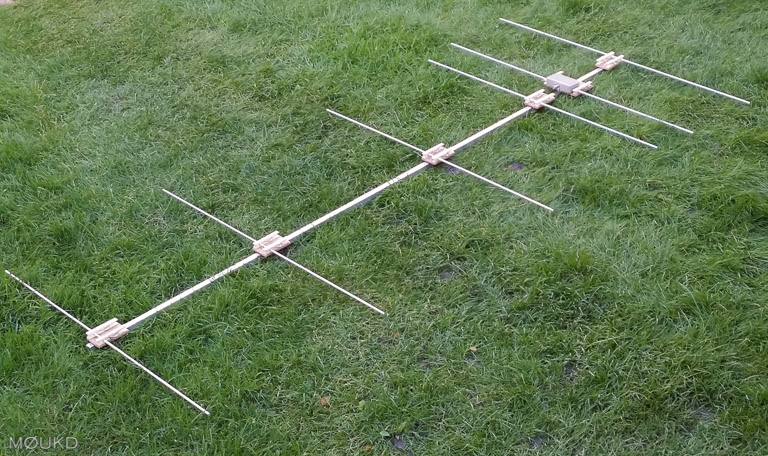 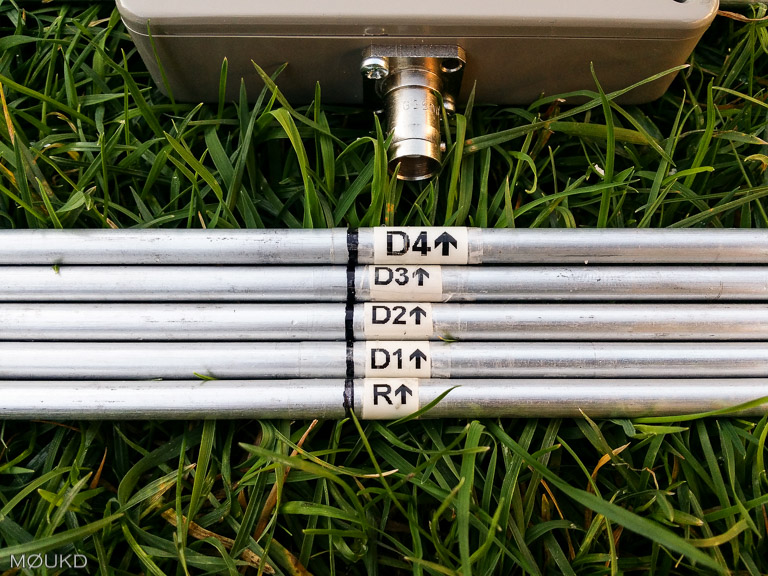 The elements are numbered and marked with a black centre line for ease of assembly. 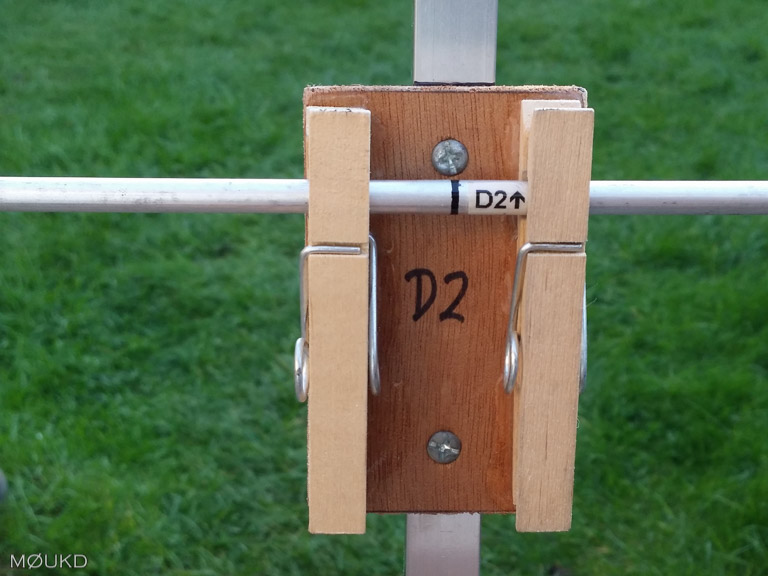 The driven element has a larger plate to accommodate the box which contains the choke and driver assembly. 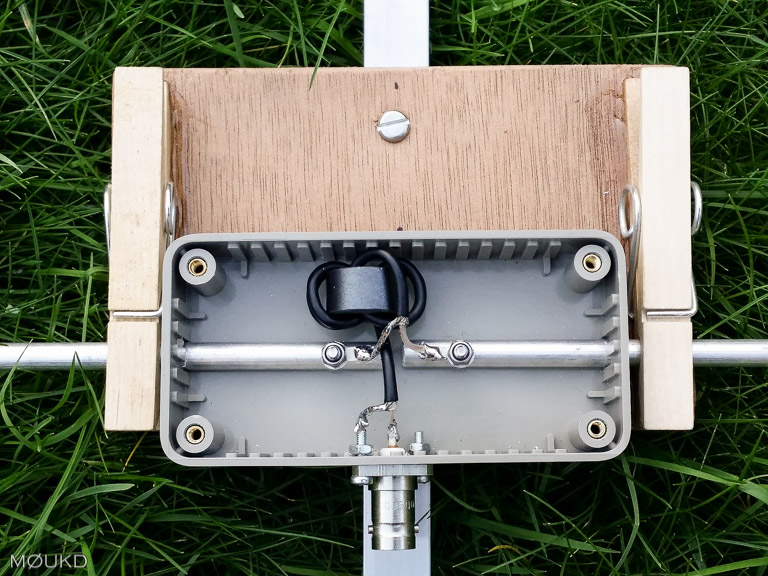 I have used an unknown ferrite with 4 turns of RG174 as a common mode choke. I first tried a small air wound choke, but it was not very effective. I have yet to test this method with 100w of RF power, but I think it will be OK.

Gil, F4WBY built this antenna to use with his new Icom IC-251E and made a video of his build, which you can see below. Cheers Gil!

Some photos of using my original homemade Yagi are below. I shall add some of the new one shortly! 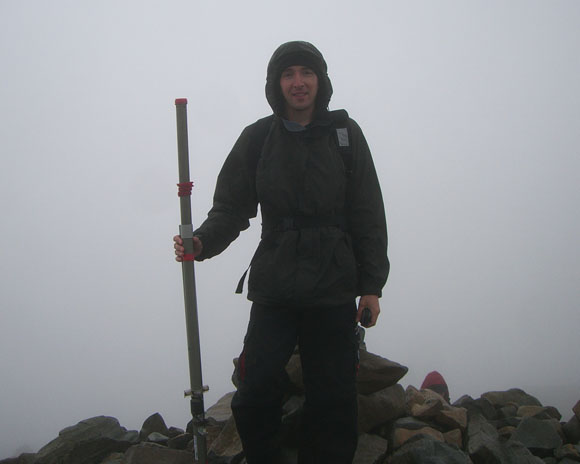 John, M0UKD on the highest point in England, Scafell Pike. 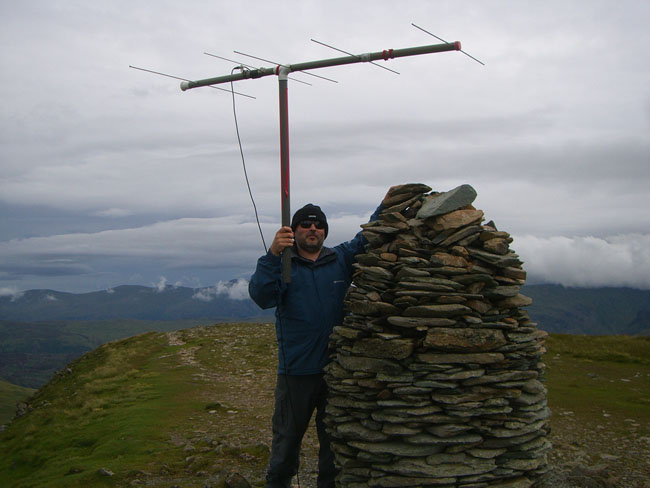 Dave, M0TAZ with version 1 of the beam on the summit of Dale Head. 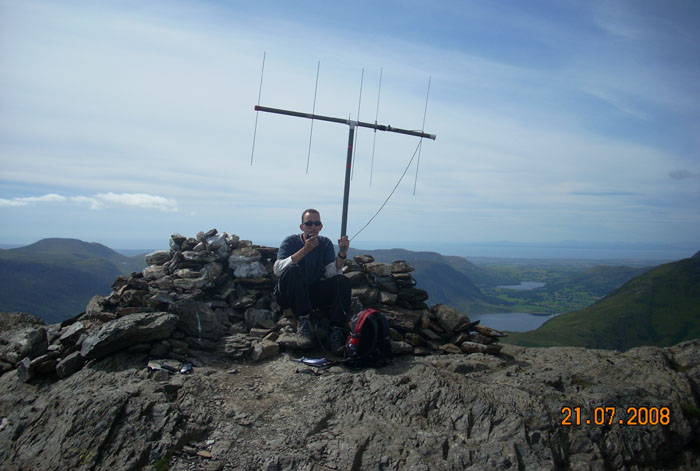 John, M0UKD operating on FM with version 1 of the beam orientated vertically. Summit is Robinson. 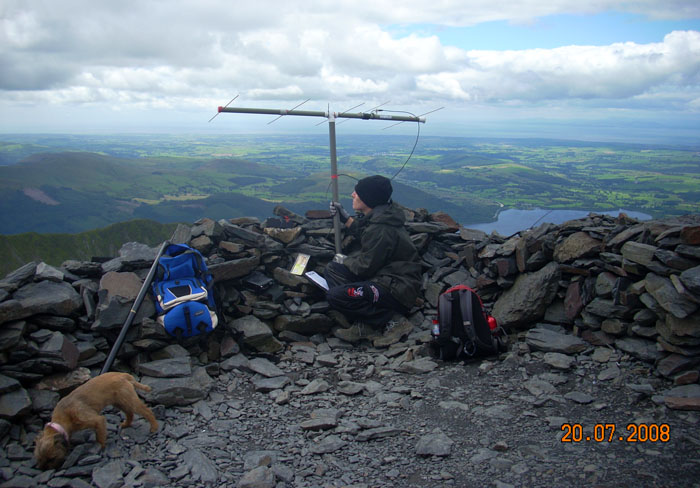 John, M0UKD on Skiddaw with version 1 of the beam.

If you decide to build this antenna, I wish you good luck. I would love to hear your results if you do, please get in touch! John.