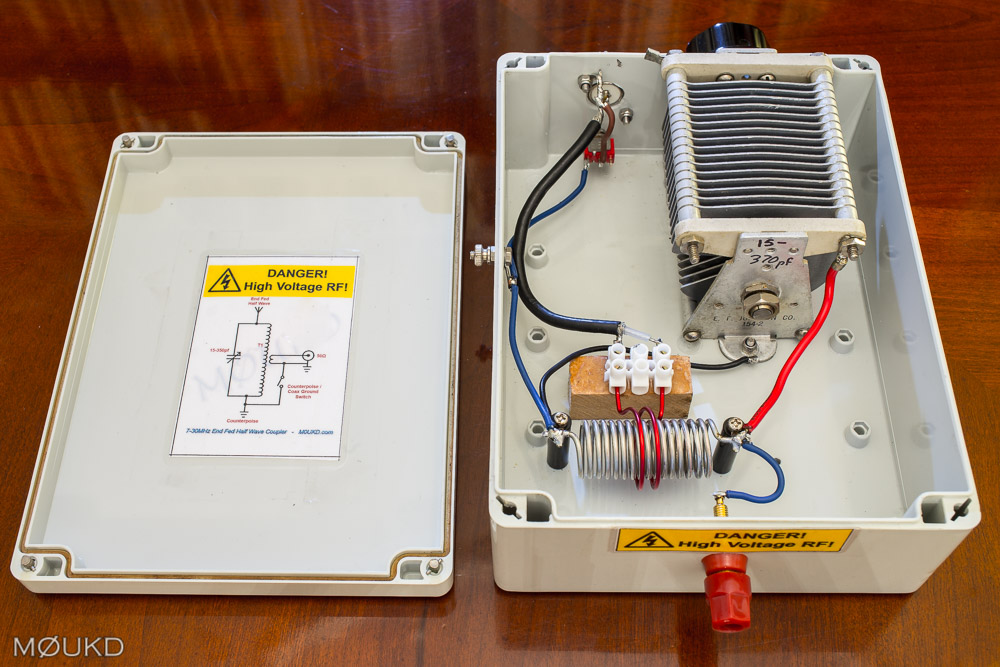 Centre fed half wave dipoles make great, simple and effective antennas for the HF bands. Sometimes however, the centre feed is not ideal, for example when you want to use it as a vertical. Being able to feed the dipole from one end gives you more options on how to erect an antenna and makes portable operation easier. A vertical, a sloper, a piece of wire hung in a hedge are all good examples. A ground mounted half wave vertical has a peak radiation angle of 20°, so it makes a good choice for DX.

I have been experimenting with feeding end fed half wave antennas matched by a parallel tuned circuit coupler. This article will explain my findings and reasons for constructing it the way I did.

A dipole can be fed anywhere along its length. A centre feed gives around 70Ω. A ‘Windom’ type off centre fed dipole (fed 38% along its length) provides around a 200Ω feed. The feed impedance at the very end of a half wave is thousands of ohms, usually somewhere between 2000Ω to 5000Ω, which we need to match to our 50Ω transceiver. The problem with end feeding a half wave is also its advantage. The high impedance means that the feedpoint has a very high voltage but  low current, therefore very little ground is required. A very small counterpoise should be adequate from 7 to 30MHz, or you can even use the coax and transceiver as the counterpoise for an even simpler portable set-up. I included a switch to be able to use either. In practice, I have found Steve AA5TB‘s recommendation of at least 0.05 wavelengths to be accurate. Steve has done a lot of research with end fed half waves and I recommend having a read of his pages.

Below is the schematic of the final build. 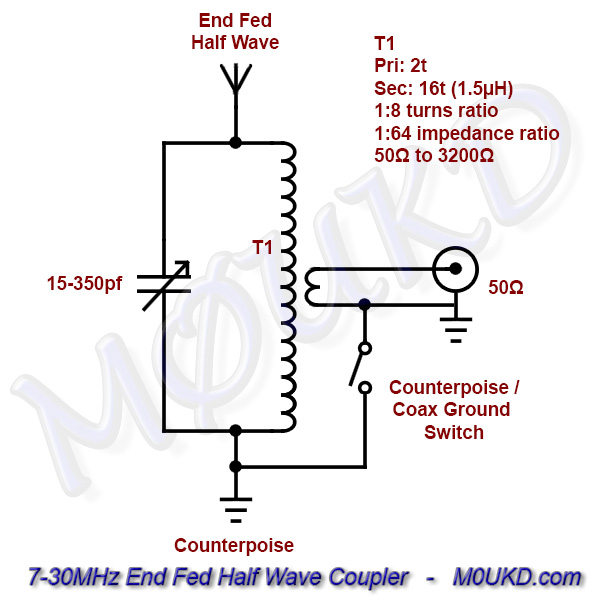 For calculating the length of a half wave in metres, I use 141÷ƒ(MHz) for wire elements. These dimensions were derived from modelling the antenna in EZNEC. I have found this calculation to work well, however it depends on many factors such as wire used, location etc. I have made a javascript calculator below for simplicity with a 15m half wave ready to go!

Half Wave antenna is: Metres 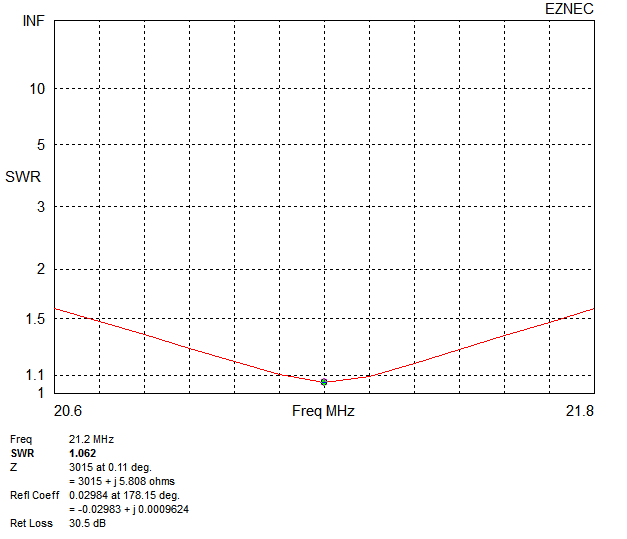 End Fed Half Wave (6.65m @ 21.2MHz, ground mounted) SWR – Actual bandwidth on the 50Ω side of the coupler will be much narrower, due to the tuned circuit we are using. This is showing the feed point SWR at 3200Ω

Current along the half wave. Notice how the feedpoint is not quite as high impedance as the top of the antenna.

First off, construction will be a juggle between available components and the desired band coverage. I had a capacitor that I wanted to use, which is a Johnson 154-2 air variable capacitor, with a range of 15-353pf. I would like to cover 7 to 30MHz with my coupler if possibe, so the next thing I needed to design was an inductor that would resonate in a parallel LC circuit at just above 30MHz when the capacitor is at minimum. Using this Resonant LC Calculator, I worked out that an inductance of 1.5μH will resonate at about 33MHz when the capacitor is at 15pf and 6.9MHz when the capacitor is at its maximum of 353pf. Sounds perfect to me! If you have a smaller value capacitor, for example 200pf maximum, it should still cover 10MHZ to 30MHz. A switch could be added to add a further capacitance of 150-200pf to include 7MHz operation.

So, lets build the secondary transformer inductor first. I wanted to transform 50Ω to around 3000Ω. This would require a 1:8 turns ratio. Impedance transformation is calculated by squaring the secondary turns ratio (note ratio, not actual turns) 8² is 64. 50×64=3200Ω (our input impedance x 8²). I looked at using a T200-6 iron powder toroid, but the problem was 1.5μH required only 12 turns. As I wanted a 1:8 turns ratio (for a 1:64 impedance ratio), I needed a primary of 1.33 turns, which was going to be impossible. I could have made it 16 turns and a 2 turn primary, but then the inductance would be too large for 30MHz.

So, I decided to use an air wound transformer. This way, I can build it with a 16 turn secondary, and at the inductance I wanted by altering the diameter and/or length of the coil. Using this Air Inductance Calculator, I worked out that a 19mm diameter, 52mm long, 16 turn inductor should give an inductance of 1.5uH, so this is what I built. 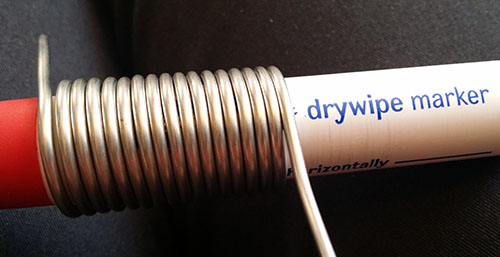 Once it was wound, I tested it on an LC meter, which confirmed it was around 1.5µH. You can expand or contract the inductor to fine tune the impedance to suit. The importance is that it remains 16 turns to match with the 2 turn primary. I then wound the primary coil, which had to be a slightly larger diameter so that it could fit over the secondary coil and provide inductive coupling. You can see the finished 2 turn primary and 16 turn secondary below. 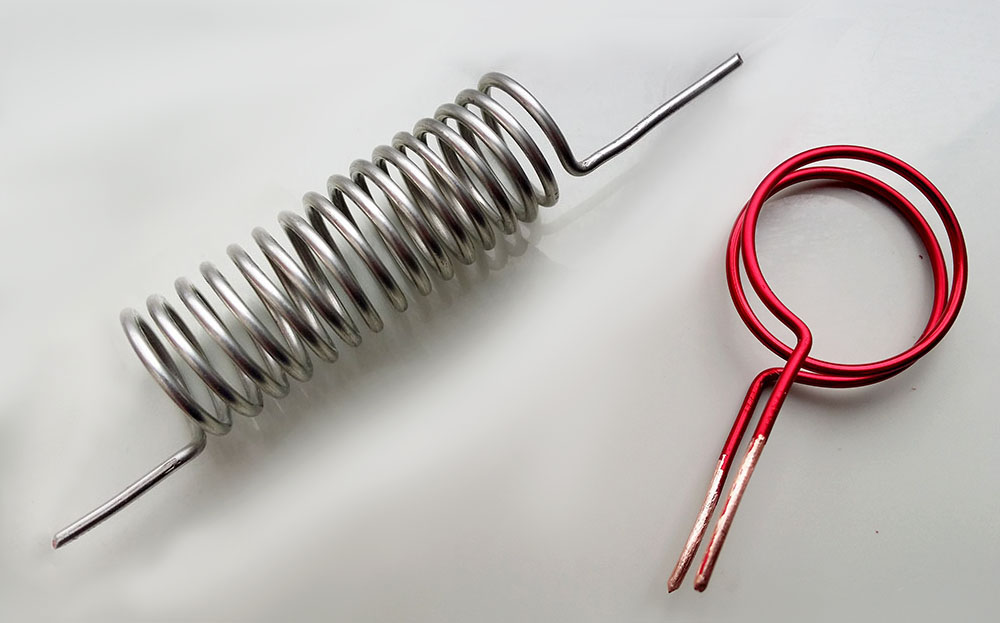 The completed inductors. They have their differences, but I will make them a happy ‘couple’!

Now it was time to assemble it all into a box. The box I used came from a club ‘junk’ sale. It is a waterproof box that cleaned up well. It was a little fiddly mounting the inductors. I used some stand-offs for the secondary and a terminal block glued to a small block of MDF for the primary. The coax is soldered to the primary, the terminal block is just to hold it in place. There is a counterpoise connection on the side, the antenna connection on the front and the capacitor, SO239 and counterpoise/coax ground switch on the rear. Some photos of the completed unit are below. 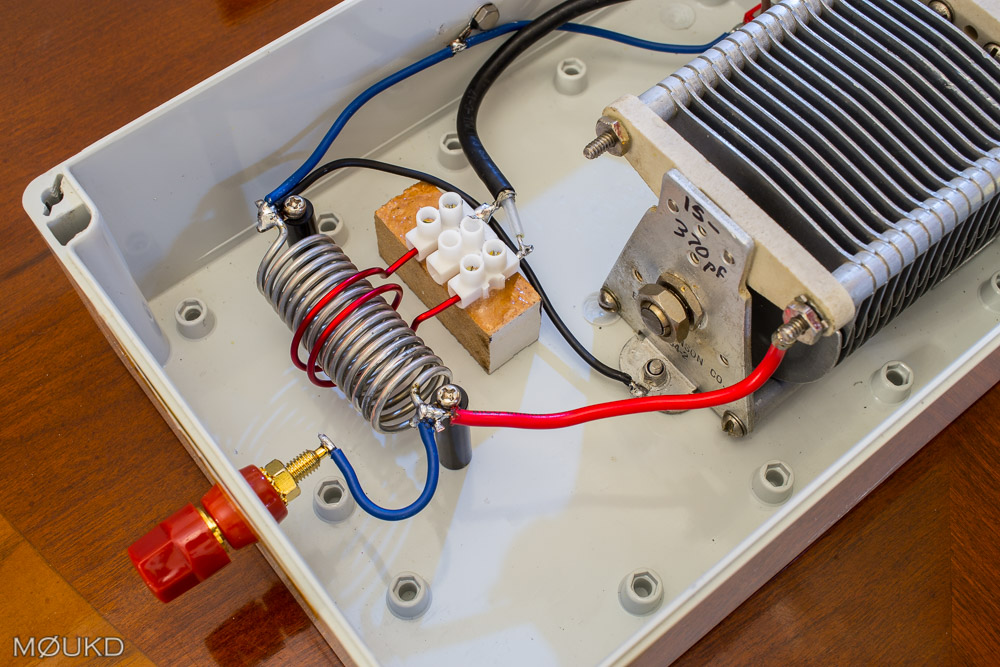 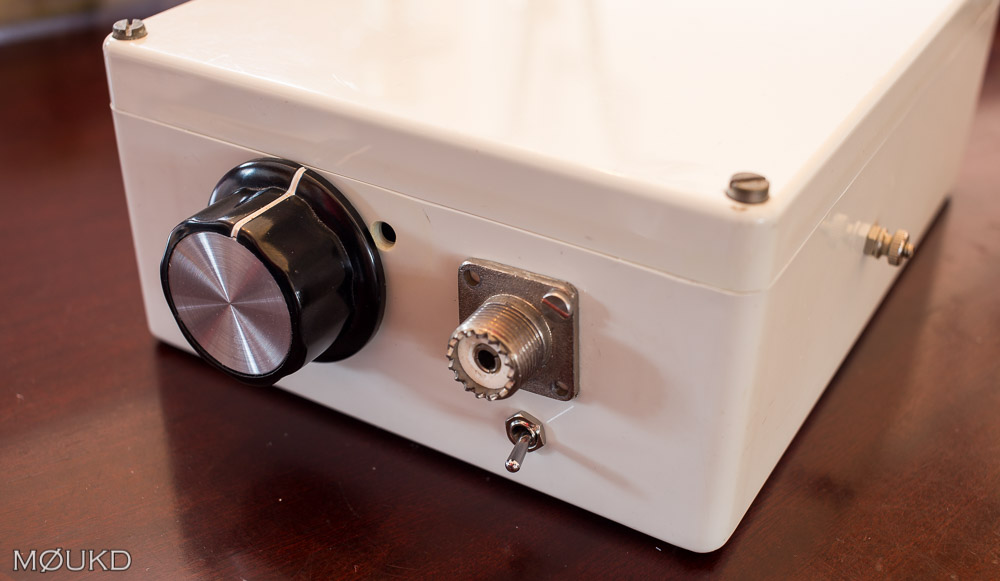 The tuning control, SO239, ground switch and on the right, the counterpoise connection. 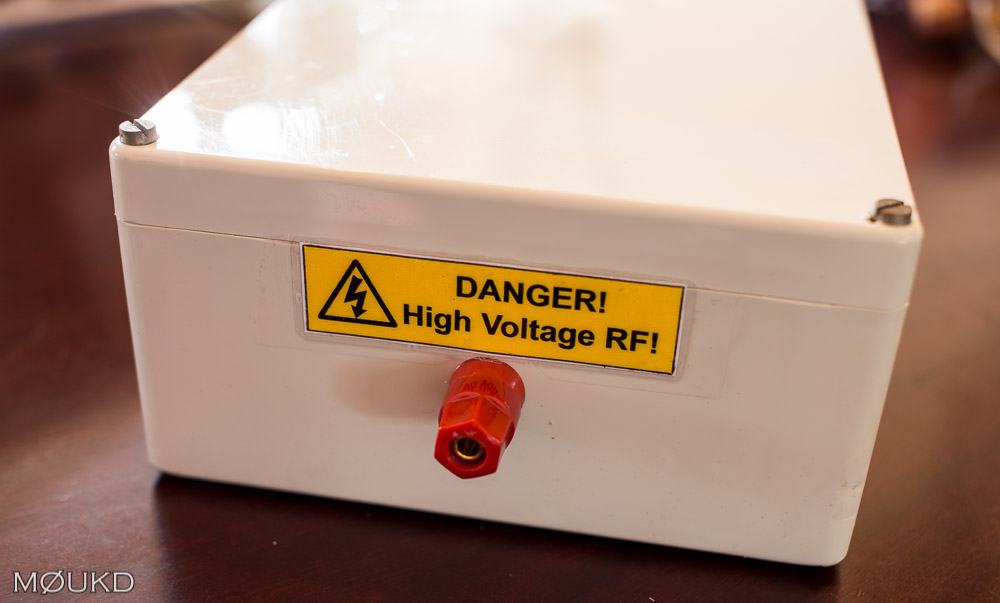 The antenna connection. The second hand box had a few holes in it, so I made this sticker to cover them up!

The unit worked exactly as designed. Attaching a 3.2kΩ resistor to the output, an input match of 1:1 SWR can be obtained from 6.5MHz to 30MHz. The frequency was a little bit lower than I calculated, but I guess this is due to extra stray capacitance. I tuned the coupler to resonance into a resistor (in my case 3.2kΩ) so a 1:1 SWR was obtained on my chosen frequency of 21.25MHz, then I removed the resistor and attached the half wave antenna (6.65m) and counterpoise (66cm) from the above calculator. Without adjusting the variable capacitor, I had a 1:1 SWR. This confirmed that I had a resonant half wave and that I was feeding it at or very close to the peak voltage point and the feed impedance was around 3200Ω. I found that a small counterpoise was required. Sometimes, the stray capacitance to ground was good enough on its own, especially on the higher bands and if the coupler was laying on the ground. If its all away from ground, I get consistent results using the above setup. I have had good success also by using the coax as the return, by connecting the ‘bottom’ of the primary and secondary together via a switch to use the coax shield and transceiver as a counterpoise.

You may be able to adjust the capacitor to match the antenna if its not a perfect half wave, but then it will be a higher current feed and the simple ground system will be inadequate. The coupler will also not be working as it was designed and will be inefficient, generating heat. The coupler is a tuned impedance transformer, not an antenna ‘tuning’ unit. Stick to the above, and it should be a sure thing! 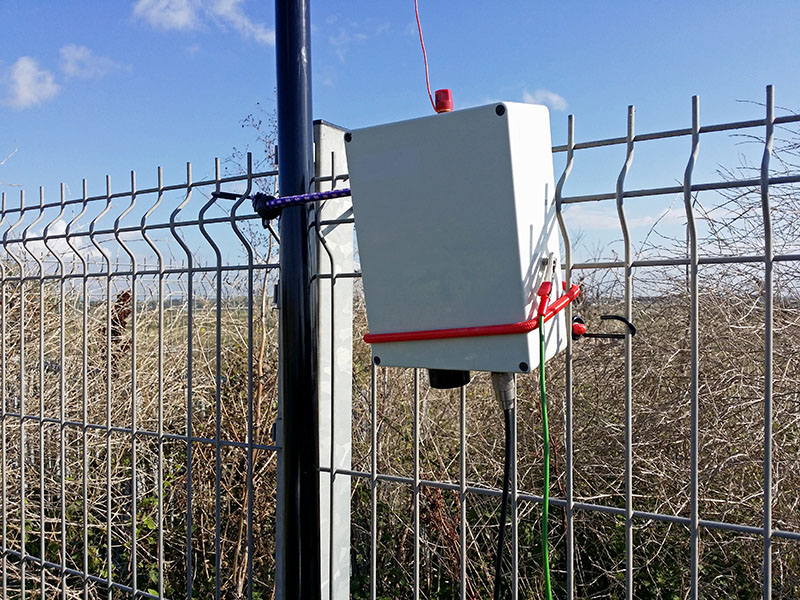 Feeding a 21MHz half wave 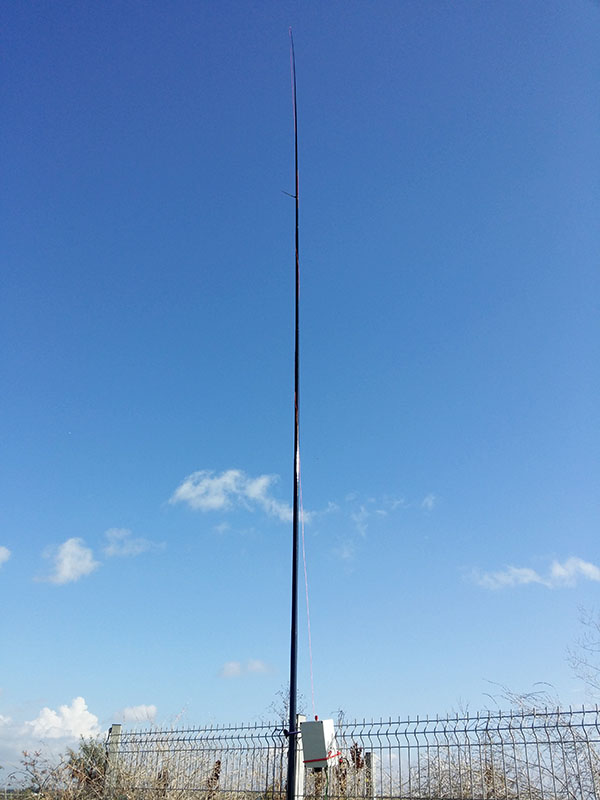 A half wave vertical for 21MHz. 6.65 metres of wire on a 9 metre fibreglass pole. The coupler is mounted 2 metres up and attached to the top of the fence. The 67cm counterpoise just hangs down in free air.

Below is a short video from my second test with the coupler, here on 17m.